President Steven Keller has over 23 years’ experience in Maryland law enforcement, retiring in 1999. During his law enforcement career, he served as a supervisor in Patrol, Crime Prevention & Community Relations, Criminal Investigations, Public Information, and Research and Planning. He received two departmental citations and five Governor’s Crime Prevention Awards. Steven earned degrees in Criminal Justice (A.A.) and Management (B.S.). He has been a member of the American Society for Industrial Security (ASIS) and the Howard County Police Retired Officers Association for over 10 years.

In 1999, Steven joined a large security concern, managing security for numerous logistics projects and facility development. In 2003, Steven transitioned to a component company, where he served as Senior Security Manager and later as Acting Director of Security, with responsibility for all investigations worldwide and security oversight of logistics and air cargo components.

In 2005, Steven and Tammy purchased an existing local concierge business, but it was not the model envisioned in a business plan Steven had written during classes at the University of Maryland, so he established Coastal Homeowner Services and Security Consulting LLC in Kitty Hawk, which provides security consulting services for supply-chain management companies. Keeping the “Cottage Comforts” part of the name from the business he had bought, Steven registered his dba as Cottage Comforts House Watch & Home Owner Services, which provides weekly or twice monthly physical inspections, vendor management, alarm management, and other services for non-resident homeowners.

Steven’s wife, Tammy, helps with the business administrative issues but has a full-time career of her own in the insurance industry. Steven and Tammy have been married for 26 years. They have a son and two grandchildren.

When he’s not working, Steven and Tammy travel and spend time at the beach. Steven also enjoys playing golf.

We’ve had the pleasure of meeting Steven at several of the NHWA’s Annual North American Conferences. 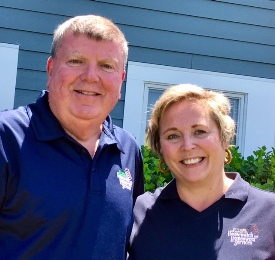