I am very happy to announce the re-accreditation of Castle Home Checks of Reynolds Lake Oconee, Greensboro, Georgia for the sixth time.

Sheila Smith and her husband, Wayne, became involved with the NHWA in 2013, when they came to our very first North American Conference in Myrtle Beach. Sheila’s questions and suggestions at the event made everybody sit up and take notice of our new British friend. Our friendship was cemented immediately, and Sheila and Wayne started a business that no one was familiar with in their area. They created a market and have since grown it to the point where it became necessary for them to hire another Home Watch inspector.

Wayne and Sheila met in England, where Sheila was a Property Manager for Hamptons International and where Wayne, who originates from Georgia (USA) but was living there at the time, was working in the disaster-management field when their paths crossed following a major flood in a house Sheila managed. Fast-forward three years, and they married on April Fool’s Day of 2006 in England. (Having both been previously married, Sheila says they were foolish enough to get married again!)  Between their blended families, they have one son and two daughters living in the UK, and two daughters here in the USA, along with their two grandsons and a granddaughter.

Wayne is a retired Marine and a retired Law Enforcement Officer. Sheila’s 30+ year career has always been involved in property and includes Letting Agent, Property Manager, and Inventory Clerk, to name but a few.

If you ask Wayne and Sheila why their business has grown so quickly, they’ll credit continuous word-of-mouth recommendations, along with targeted advertising. The neighborhoods they serve consider them a vital service for worried property owners who are concerned about leaving their homes for any length of time. Sheila and Wayne recently enlarged their team with the addition of Jonathan Burnette.

Sheila is a trusted advisor who serves on the NHWA’s Advisory Board and our Best Practices Committee. She has recently earned the designation of Certified Home Watch Professional. 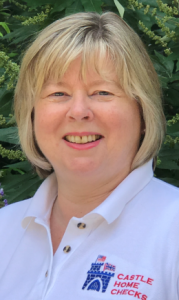 Castle Home Checks serves the neighborhoods in Reynolds Lake Oconee, The Landings, Great Waters, Cuscowilla, Harbor Club, and surrounding areas. Contact Sheila at (706) 817-0889 or Wayne at (678) 591-2506, or at info@CastleHomeChecks.com. To learn more, go to www.CastleHomeChecks.com.