Edisto Beach Home Watch of Edisto Island, South Carolina, has earned accreditation from the NHWA for the second year.

Owner Jeff Hebert (pronounced ā’·bare) moved to South Carolina in 2014 from Birmingham, Alabama, and instantly fell in love with Coastal South Carolina and the Lowcountry. Jeff’s house was destroyed in Hurricane Matthew, and he and his partner, Martha, moved to Edisto Island. Jeff retired from sales management and distribution of live goods in The Home Depot’s garden department for South Carolina, where he traveled to 24 stores per week throughout the state.

Jeff now works where he lives. He was attracted to the Home Watch industry because during the four years running up to opening Edisto Beach Home Watch, he witnessed three hurricanes in the area. (Growing up in Dade County, Florida, he became proficient in hurricane preparation.) Jeff has taken care of neighbors’ homes while they were out of town.

Jeff says that the wild animal population, while being cute and fun to watch, can be a terrible nuisance to homes, cars, and boats in the Edisto Island and Lowcountry area. While the homeowner is away, an animal can create thousands of dollars’ worth of damage to homes, cars, pools, and property. Two winters ago, a family of about 14 adult raccoons and their offspring “moved into” a house in Jeff’s neighborhood through air-conditioning ductwork, which resulted in approximately $10,000 worth of damage to the home. That’s just one story and doesn’t include what happens with squirrels, opossum, and other critters. These can be detected early with regular Home Watch inspections.

Jeff has earned the designation of Certified Home Watch Professional from the NHWA, making him one of the elite Home Watch providers in the industry. The CHWP designation shows his commitment to providing excellent service to his clients. Through honesty and communication, Jeff‘s goal is to offer a Home Watch service that provides peace of mind to the homeowner so that while his clients are away, their homes at the beach will be okay.

Jeff and Martha enjoy the laid-back pace of Island life. They love their neighbors and the way the town comes alive with visitors from Spring Break through Thanksgiving. 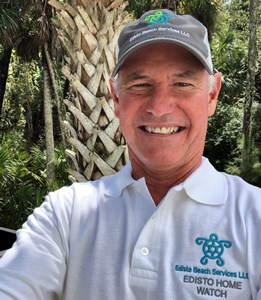 Edisto Beach Home Watch serves Edisto Island. You can reach Jeff at (843) 631-0423 or at edistoservices@gmail.com. Learn more at his website, www.edistobeachservices.com.