GMan Home Watch of Venice, Florida, has earned accreditation from the NHWA for the third year.

Venice is home to owners Jorge “George” and Barbara Martinez, who started GMan Home Watch following distinguished careers in the FBI. The name GMan Home Watch is a play on the slang term for FBI Special Agents dating back to the 1930s. As former Special Agents, they know the importance of providing their clients with professional, dependable, reliable, and trustworthy service. GMan Home Watch specializes in serving and protecting each client’s home. George and Barbara believe that you can’t be an expert in everything; they would rather be small and concentrate on Home Watch than to branch out into other areas.

George and Barbara know the wonders of vacation home ownership. They also know the worries of ownership from afar, especially after a storm. Even worse, they know what it is like to return to paradise only to find damage due to a broken air-conditioner or pipe. Combining their personal experiences with their dedication to serving and protecting the public is where the idea of GMan Home Watch got its start. George and Barbara want their clients to see them as their most trusted neighbor and feel comfortable knowing their home is being well cared for by a responsible and reliable team while they are away.

George is a veteran law enforcement officer. He served as a local police officer in Skokie, Illinois. He joined the FBI in 1988 and served for 23 years as a Special Agent and Supervisory Special Agent, investigating crimes and terrorism. His credentials highlight excellence in areas of theft and property crime prevention and investigation, as well as physical and personnel security. During his career, George received numerous awards and commendations from three FBI Directors for criminal investigations. He was also recognized by the U.S. Attorney’s Offices in the District of Columbia, Maryland and Virginia for outstanding investigative efforts, which resulted in multiple indictments and convictions. George retired in 2010 and worked as a Program Director for ICF International, leading a cadre of staff members in support of the Department of Homeland Security, U.S. Citizenship and Immigration, Fraud Detection, and National Security Directorate.

George is also an NHWA Certified Home Watch Professional. The CHWP designation shows his commitment to providing excellent service to his clients.

Barbara is also a retired Special Agent/Supervisory Special Agent of the FBI, with over 33 years of service specializing in criminal and terrorism investigations. Barbara’s distinguished career included notable undercover assignments in organized crime and narcotics investigations. She was a member of the FBI’s Evidence Response Team and participated in high-profile cases, including the investigation of the Unabomber and the 1996 Olympic bombing. Barbara worked to bring life-saving equipment to first responders across the country as the Unit Chief of the Weapons of Mass Destruction Operations Unit. After 9/11, she led a Joint Terrorism Task Force in Richmond, VA, which successfully neutralized terrorist plots afoot only 90 miles outside Washington, DC. Together, this husband-and-wife team bring over 60 years of trusted experience, accountability, and a keen eye for detail. 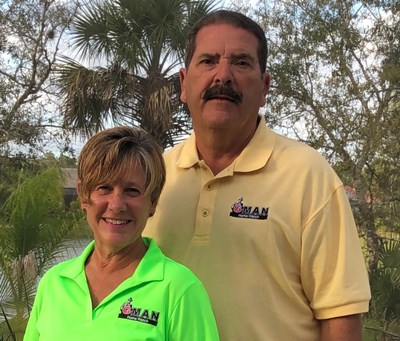 GMan Home Watch serves Venice, Nokomis, Englewood, and West Villages. They can be reached at (941) 914-9104 or gmanhomewatch@gmail.com.  Learn more at www.GManHomeWatch.com.