Gulf Coast Home Watch of Southwest Florida, of Port Charlotte, Florida, has earned accreditation from the NHWA for the third year.

Owners Paul and Brenda Smich started their Home Watch business a few years ago, as they were beginning the next chapter of their lives.

Paul moved from Pittsburgh, Pennsylvania, to Sumter County in 1987, where he began his law enforcement career. Promoted through the ranks with the State of Florida, he met his wife, Brenda, and they married in 1997. Paul began his employment with the Lee County Sheriff’s Office in 2009 and was there until his retirement in December of 2019.

Brenda moved from Syracuse, New York, to Charlotte County and resided there for most of her adult life. She started her career in 1989 with the Florida Department of Corrections and held many positions, leading to her current position as Senior Classification Officer.

Due to each of them having 30 years of exemplary service in law enforcement, Paul and Brenda both have a desire to continue to serve their community. They have been homeowners since 1998 in Charlotte County and understand all aspects of what can go wrong with an unattended residence.

Paul and Brenda have a large family, consisting of five children in their 20s and 30s, and seven grandchildren. They are proud that all their children are productive members of society. 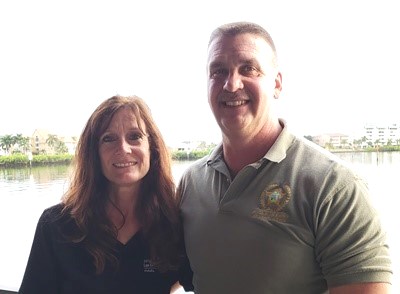 Gulf Coast Home Watch of Southwest Florida serves Port Charlotte, Placida, Rotonda, Englewood, and Boca Grande. You can reach them at (941) 740-3810 or gulfcoasthomewatchofswfl@gmail.com. Learn more at their website, www.gulfcoasthw.com.