Partners Tim Martin and Theresa Weerdenburg own and operate HomeAssure. Tim was born and raised in Medicine Hat, Alberta. He fell in love with the Kimberley area on a skiing trip in 1977. Tim enjoyed many summers and winters in Kimberley, staying at local lodges and condos until purchasing a property there in 2003.

Tim fully understands the challenge of owning a second home and keeping it maintained. Before retiring to his “happy place” in 2016, he worked full-time in Medicine Hat and spent many years travelling to and from his Kimberley vacation home.

Tim worked for 35 years in a busy land-surveying company as an Alberta and Canada lands in several capacities, working his way up to Director and Board Chair. After retirement, He enrolled in the Mountain Hospitality program at College of the Rockies, which led to him working for a season as the concierge of a local wedding estate. Tim then took a course in Business Entrepreneurship, Planning and Marketing at College of the Rockies, and the idea to launch HomeAssure was born.

Theresa was born and raised in Ontario. She moved to Medicine Hat with her young family in 1991 and was a very active stay-at-home mom who also participated in numerous volunteer roles. Theresa started her work career in banking, becoming a loans manager and a legal assistant. Over the years, she has been involved in the renovation of several homes, including a historical Medicine Hat home built in the year 1900 that was completely gutted and renovated. Theresa has a solid background in bookkeeping and is responsible for that area of HomeAssure, as well as taking care of the day-to-day operations of the business with Tim.

Theresa is very artistic and talented in performing home renovation projects. When Tim and Theresa met in 2011, the debate was over who had the better tools!

Tim and Theresa are the parents of a combined family of seven children and two grandchildren. An avid outdoorsman, Tim enjoys exploring, hiking, biking, golfing, fishing and skiing. Theresa shares a love of the outdoors with Tim but is also passionate about art, theatre, climbing and yoga. They are both avid SCUBA divers and underwater photographers who’ve spent many hours underwater all over the world. Theresa and her four boys are avid skiers. Tim and Theresa also share a love of the mountain lifestyle of Kimberley and are looking to become very active in the community. Tim currently sits on Kimberley’s Board of Variance. 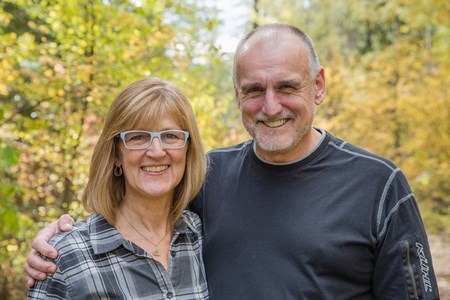