Homewatch Suncoast of Sarasota, Florida, has earned Accredited Member status from the NHWA for the second year.

A true collaboration that brings the strengths and experiences of partners Julie Rosenkrantz and Don Mark together, Homewatch Suncoast is operated based on the highest standards and ethics in the industry today. While Julie hails from Connecticut, Don comes from the Chicago area. Both are longtime residents of Sarasota. They are both heavily involved in their community and care deeply for their fellow Sarasotans. Don, as a vacation homeowner, and Julie, because of her career in Sarasota Real Estate, knew that providing a top-notch Home Watch and concierge service would be a great thing to do…so they made it happen.

Julie and her family have been Sarasota residents for over 15 years. Before moving to Sarasota, Julie worked in the employee benefits field in Connecticut. Her time in Florida has been spent raising her two children, being involved in their homeowners association and architectural review board for her neighborhood, school committees, and volunteering for and supporting non-profit organizations in the community. Julie has also had her Florida real estate license for over 10 years.

Don and his wife had been coming to the Suncoast for over 20 years. Ten years ago, they bought a condo on Siesta Key. During that time, Don joined the homeowners association and later became president of the association. His experience as an absentee homeowner and president of the homeowners association made him acutely aware of the issues of absentee ownership. In 2017, Don retired as an Environmental, Health and Safety Engineer. Don was a 25-year member of the American Society of Safety Engineers, which gave him a combined skill set in the areas of catastrophic emergencies, including inclement weather and hurricanes and the water and mold damage associated with them. He was responsible for the safety and security of employees and customers nationwide. He has a thorough understanding of HOAs and insurance, and a mechanical knowledge of homes.

Together, Julie and Don have set their sights on becoming the premier Home Watch and Concierge service in Sarasota. They have a preferred vendor list that helps them ensure their clients have the highest quality of care for their homes. And we are proud to have them as Accredited Members of the National Home Watch Association. 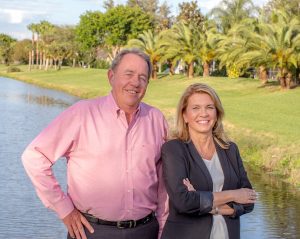