Owners John and Shari Miller live in Wilbur, on Lake Roosevelt. Originally from Skagit Valley (60 miles north of Seattle), they transitioned from the hustle and bustle of Western Washington to the ” slower” style of Eastern Washington nine years ago for John’s job. John is now one of the Captains on the Keller Ferry (a 10-minute ferry ride which crosses Lake Roosevelt). For the last six years, Shari has managed the Keller Ferry Marina and Campground. Between their jobs and living in the Lake Roosevelt National Recreation Area, they have met a lot of people who are there seasonally, so John and Shari decided to open Inland Empire Property Watch.

Between them, Shari brings the administrative side to the business, whereas John brings the knowledge of home inspection to Inland Empire. Although he’s not a contractor by trade, John is currently building a home and has worked on many home projects. He knows homes inside and out.

John and Shari are looking forward to this new adventure!

John and Shari have two kids: Kiera, who is enrolled at Running Start at Spokane Falls Community College, and Devin, who is a freshman at Wilbur Creston High School. The family enjoys travelling, hiking, camping, boating, and snow skiing. 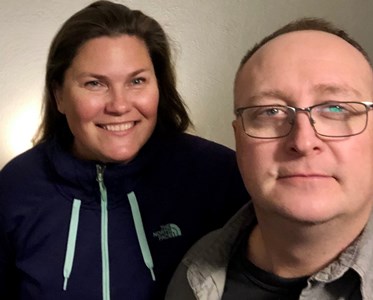