Lotus Home Management of Santa Fe, New Mexico, has earned accreditation from the NHWA for the seventh year.

Ber and Lauren Evans founded Lotus Home Management in 2011 but have been a presence in the industry since 2007. Ber’s educational and professional background is in business management. Lauren’s 17-year marketing career in the high-end Santa Fe residential market included seven years of working in the security industry. It was during that time that she saw the strong demand for a professional, high-caliber home management service for absentee second homeowners. Lotus’ reputation is bolstered by its exemplary level of service for discriminating clientele.

A team since 1981, Ber and Lauren met in college at the University of Kansas; it was love at first sight. During a Spring Break trip to Florida, they realized their grandparents had known each other in Pennsylvania (where Ber and Lauren were both born), and they knew fate had played its hand. Married in 1987, they moved from Los Angeles to Santa Fe, where they put down roots a year later. After 30 years and two great kids who are now outstanding young adults, Ber and Lauren are still going strong. Three generations of family now live in Santa Fe, which continues to provide a strong sense of connection and joy. Their hobbies include golf, cooking, gardening, home improvement projects, and hanging out with the beloved family dog. 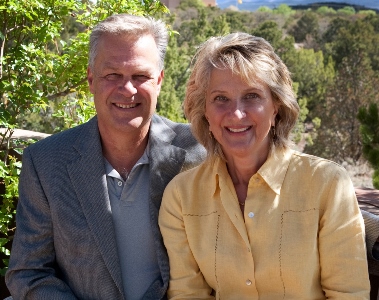