Salo Home Watch of Rockport, Massachusetts, has earned Accredited Member status from the NHWA for the seventh consecutive year.

Owner Dana Salo started Salo Home Watch in August of 2009. He continues to operate it on a part-time basis, around his full-time job as a 33-year letter carrier with the USPS. One day in February 2009, Dana counted all the vacant, seasonal homes on his mail route and an idea began to form. A retired doctor on his route had asked him to check on his home once a month. During one particularly cold morning, Dana conducted his check and found water pouring out of the garage. The homeowner had neglected to turn off his water before leaving. The homeowner learned a lesson, and Dana’s idea grew legs.

Dana has learned a lot in the ensuing years. Now he operates Salo Home Watch with his girlfriend, Alison Callahan. The plan involves building the company upon his retirement from the USPS.

In his spare time, Dana enjoys golf, baseball, bicycling, hiking, the beach, and traveling. He also enjoys following his nephew, Ryan, who is a collegiate stand-out in baseball.

We’ve had the pleasure of seeing Dana every year at the NHWA’s North American Conference. He is on the NHWA’s Advisory Board and a member of the Best Practices Committee. 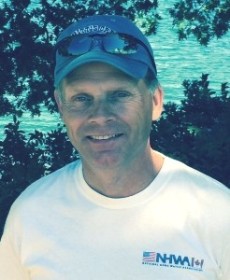 Salo Home Watch serves Cape Ann, including Rockport, Gloucester, Essex and Manchester-by-the-Sea. You can reach Dana at (978) 660-2372 or at salohomewatch@gmail.com. Learn more at www.salohomewatch.com.