White Pelican Home Watch of The Villages, Florida, has earned Accredited Member status from the NHWA for the eighth year.

Owner Steve Stiffler and I met at our very first Conference in 2013 in Myrtle Beach, SC. Steve was just starting his Home Watch company and was there to learn and network. White Pelican Home Watch has continued to grow and to be an extremely successful Home Watch company. And Steve and his wife, Patty, just get better and better at it. Steve has earned the NHWA Certified Home Watch Professional designation, making him one of the top professionals in the business. The CHWP designation shows his commitment to providing excellent service to his clients. Steve also spoke at our North American Conference in May of last year.

Steve grew up in Medina, Ohio, attending Sumon Lukio in Tampere, Finland, as a high school Rotary Youth Exchange Student. Upon returning to the U.S., Steve attended the Aetna Institute in Hartford, Connecticut, earning a degree in Finance & Risk Management. Steve’s first job was with an insurance agency in Medina, working alongside his father for 10 years. Upon leaving Ohio for sunnier weather, Steve worked in the Florida insurance marketplace for several large companies. He retired after 32 years of commercial insurance sales.

Steve gained a great wealth of first-hand Home Watch experience starting in 2011, while keeping an eye on his Florida seasonal neighbors’ houses, and that’s what prompted him to start his Home Watch business.

Steve’s family includes Patty, his wife of 18 years, and three sons: Alex, Brian, and Cody. He has two wonderful grandchildren, Haylee and Tyler. Oh, and you can’t forget the office mascot, Madison, a 10-year-old Shih Tzu.

It’s always a pleasure to see Steve. I got to catch up with him on my Florida tour in January. 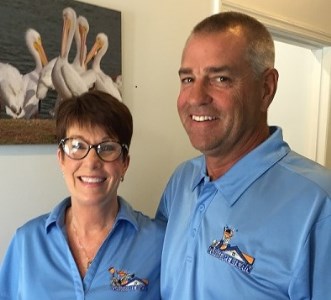